Excluding a brief seven month stint of bad diet and smoking back in 2010, I have been running for a couple of years. I, like so many others, started running to keep fit. Present day, Saturday 11th to be exact and I am putting my lungs and my legs through their paces around the Talybont reservoir  near Brecon, Wales. I plan to do an eight or nine mile run but time constraints, the unfamiliarity of the region and working out where and when to meet K-Theory forces me to reduce the run to a leisurely 6.2 mile loop. During the loop, while I admire the impressive scenery of the reservoir and the wooded hills that surround it, negotiate an ankle breaking path that I am pretty sure becomes a stream in the winter, and play roadside roulette with the oncoming traffic and the stinging nettles I wonder how I can combine my love of running with my overwhelming desire to write.

Fast-forward to Sunday 12th K-Theory and myself are in Hay exploring the second hand book shops, K-Theory has picked up a book on Fell running.

“Would you like to do Fell running” she asks

“Definitely” I say as I thumb through the book, reading a paragraph here and there, admiring the style of the writer and thinking how it reminds me of the last running book I read. 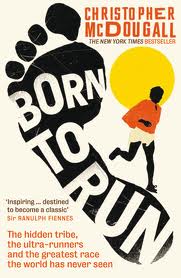 Rewind now, back to March/April earlier this year, I have picked up ‘Born to run’ by Christopher McDougall – upon recommendation from Speedy-Vic. Up until this point, I was quite content to huff and puff along the Thames path around Richmond and Twickenham. Sure I had aspirations of running the marathon, one day, but for now running 15 – 20 miles a week was satisfying. Five weeks later and McDougall has loaded a cannon and blown my 20 mile runner clear out of the water. Not even into runs of double figure lengths and McDougall, Jurek and Caballo Blanco have me no longer content with a marathon some time in the future. I want to be an Ultra runner.

May, this year. The village of Envaux on the Dordogne river in France. I’m on holiday and Born to Run is still fresh in my mind. I am away for two weeks with K-Theory and a couple of our friends, I also have my running kit with me and after hitting the 10 mile mark a week before the holiday I am dead keen to keep the momentum going. The only problem is we are in a valley and the only way to get any satisfaction is to run a loop that incorporates the hill that climbs up from the banks of the river; a gruelling 500ft ascent over the course of a mile up dusty gravel tracks in 30 deg’C heat and extortionately high humidity making the runs hot and hard and very very dusty. The Dordogne gave me a taste of off-road running, a taste from a recipe derived from Born to Run.

Fast forward to the end of June. I am in Redhill Surrey for the Spartan Sprint. An adventure run which tests your strength and endurance through a series of obstacles on a 5K circuit. The obstacles varied from walls and cargo nets that needed to be climbed to crawling through mud and ice under barbed wire and electrified wire. I finished covered head to toe in mud with bloody knees, bruised elbows and thighs, and a taste for a new recipe – adventure running.

Body boarding, cycling, training for marathons, adventure runs, triathlons or even just going out and doing some hill walking. Born to Run awakened my inner masochist and this blog is a record of the punishment I put myself through. For a long time I thought a marathon would satisfy my running obsession but now it seems more likely that the marathon is one more step on a road to something else. All I can say is the day I am satisfied, the day I say ‘ok, I’m done.’ That will be an interesting day.

2 thoughts on “Introductions – or – Why I run up hills”