Feeling inspired by recent runs I decided to take in a long run I have been meaning to do for some time, with a little bit of a tweak. In the past I have run around Sugarloaf Reservoir — a very nice run indeed and staring at maps (as a runner is prone to do) I couldn’t help but notice how relatively close it is — 10 to 15K at most (I know that is a long way but in relative terms, quite runnable a distance), the only problem is finding quiet roads and of course tackling the bastard hills. Don’t get me wrong, I don’t mind running up, but up for 15K takes a special kind of commitment which is hard to muster on a regular basis — but on the plus side, if I can get a lift to Sugarloaf then it’s more or less down for 15K.

By a stroke of luck, the new location for race two in the Trail Running Series takes place not too far from Sugarloaf, so to get a feel for the hilly terrain that awaits me on July 9, I decided to incorporate some of the hills in the Christmas Hills as part of my preparation for race two.

As with most good trail runs, it involved being abandoned on the edge of an isolated road.

After seeing Sandi drive away, I would proceed over the hill that makes up One Tree Reserve — giving me a taste of things to come — and them skirt the edge of the reservoir before following the tracks and trails that wind their way through the valleys of Kangaroo Ground on my way back to Warrandyte. 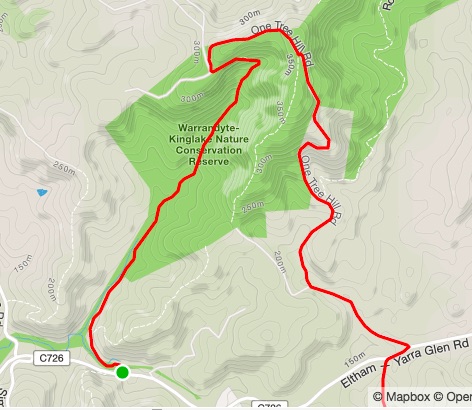 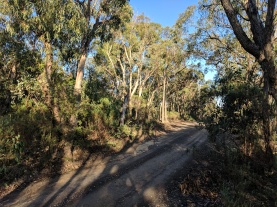 The first part of the run required a climb of a smidge of 200 vertical metres over 4.5 kilometres, I don’t know how One Tree Reserve got its name because there is more than one tree there, but the initial run along Happy Valley Track was certainly accurately named. A nice wide management track, relatively easy underfoot with damp trees all around me dripping in the very chilly early morning, if I wasn’t running I would have felt severely underdressed in my shorts and two layers, but the low temperatures helped keep me cool as I gradually increased my altitude.

At the crest of the hill, I found myself on a service road, to my left a valley, the sun and low cloud obscuring the view, reminding me of that Led Zeppelin song Misty Mountain Hop, to my right a sparsely wooded hill top, not a sound of another soul for kilometres. I had planned to run a track that cut through the trees on my decent but it was closed for maintenance so I stuck to the service road, which turned out to be remarkable convenient as I could literally follow it all the way to the bottom and be exactly where I needed to be. 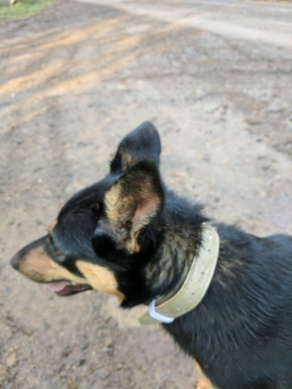 About a kilometre into my 3.5K descent down the hill  — it’s all downhill on a nicely graded service road, blissful to run and makes the tough 4K climb well worth it — I passed what looked like a farm, there a dog — a Kelpie I think — watched me, wagging its tail and looking very happy — I said hello, as I am prone to do, and it immediately took off along the field, stopping approximately every 300 metres to see where I was, this dog raced me all the way down the hill, sometimes in the field above, sometimes along the fence line of the creek below but there, this happy chappy ran near me all the way to the main road at the end, I was a little concerned he was going to keep following me all the way home, but he did not (phew!).

I followed Ridge Road along the top of the valley which extends south-westerly from Sugarloaf Reservoir before switching to Westering Road which I would follow all the way to the other side of Kangaroo Ground. Again, fairly easy going, some up, some down but nothing too taxing, my recent experience in running more than 12-15K is what worked against me. Still — the sky was blue and the scenery around was stunning to run through, lots of Wildlife too — Roo’s, Wallaby’s and at one point I snapped a few pics of a Wombat having the nocturnal equivalent of a midnight snack. 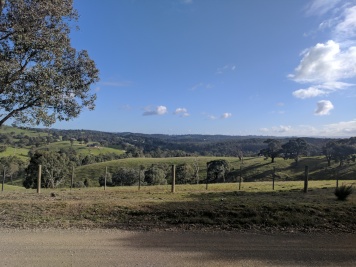 As I approached Henley Road, I realised that I wasn’t going to manage much over 20K that day, so stopped short of Menzies Road.

Still, awesome run and when I need to run 25-30K next, I know where I will be running.

The next day I was not nearly as sore as I imagined I was going to be and Sandi and Matt were scheduled to go for a run, so I suggested we all go to where they picked me up the previous day and check out the Kangaroo Ground Aqueduct Track.

From end to end it is 3 kilometres, following the valley and cutting between farmland and private paddocks, we saw roos cows, horses and a red breasted wren. A pretty little run — it is a shame it is not easy to connect with Research, where the Aqueduct trail continues.

Monday 26 marks the beginning of Marathon training 6 months to get ready for Marysville and try and get my trail marathon time down to around the 5 – 5  ½ hour mark. The hill training, I need to do for races two and three of the Trail Running Series will fit nicely with my mountain marathon training. I am also looking at taking on some Tennis as an alternative cross training exercise.

Week one report due at the end of the week