Did you know that Banyule means “hill” in Woiwurrung — the language spoken by the Indigenous Australians in this area? well I didn’t until I ran past a very informative sign on my long run last Sunday.

My goal was to increase the distance on my long run by 2-4 kilometres, my goal was to do something nice and simple (terrain wise) given my efforts in Smiths Gulley the previous weekend.

But I also wanted to expand my running map of north-east Melbourne, so with Sandi’s help, I was dropped off a few Ks outside of Greensborough to run back to Warrandyte along the Plenty River and Yarra River trails — two river trails winding their way through the suburbs, bound to be flat right?

That’s not a hill!

Once clear of the footy ovals around Greensborough and Montmorency the trail glues itself to the banks of the Plenty river and I find myself running at the base of steep rocky banks with civilisation perched on the very edge of the short cliff-faces, or at least that is how it seems from down here. The sealed path is easy to run on (exactly what I am after) and I find myself pacing a little quicker than I like but the easy to run path and the relative flatness of the trail is a change to what I have become accustomed to and despite the pace being a good 15–20 seconds faster than I am punching for, it feels easy to run, so I decide to just go with it.

As I begin my fifth kilometre I emerge from (what I will describe as) the Plenty River valley into horse country, a vast open plain divided into horse paddocks with wide gravel path winding its way slowly upwards. I started the run a little later than intended so the sun is getting higher in the sky and it is surprisingly warm as I follow the meandering trail over Banyule hill.

Now, climbing 30 metres over a kilometre isn’t exactly taxing ascent but it was a surprise, a pleasant one though.

The descent is as long and as steep as the ascent, although looking at the elevation chart I am glad I tackled this small hill in the direction I did. Soon I am back on the Yarra trail, and heading towards Westerfolds Park.

Longer and faster than expected

I planned to meet with Sandi and our new puppy (Missy) near Beasley’s Nursery but the course is slightly longer than I anticipated and it takes me a little longer to get to our rendezvous. Still, my splits average out at 6min/K so I get there not as quickly as I anticipated but quicker than expected.

All in all, a good long run — feeling strong for the months of running ahead. 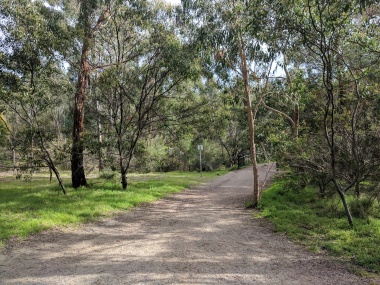 5 days of running a week seems to agree with me, this week I need to re-incorporate gym and tennis training as part of my overall fitness and cross training regime.