Hills was the name of the game this week, lots and lots of hills.

Luckily, there are indeed lots of hills to run up in my corner of Melbourne so finding a decent climb was never an issue.

The plan said either hill repeats or rolling hills and both Larapinta and SCC are on trails so obviously finding a hilly trail to run loops on is the best way to go.

Well, thanks to the gold rush, hills and lots of trails over them is not an issue in Warrandyte and I was soon running a 2.5ish kilometre lap which took me up and around Fourth Hill. 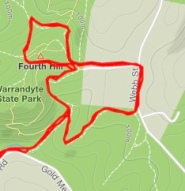 The meagre 50 metres of vertical elevation which I had to clmb felt like a lot more than that, the dry and dusty management vehicle track was hard work and I did find myself cursing a bit as I made my way along the rocky Watermans Track (about half way around the loop) with the knowledge I had an interesting climb back up to the top of Fourth Hill.

But then the winding path down to the start of my loop was upon me and, well – I felt good – I felt like I could go again, which was good because I had to

The 30 mins of rolling hills was over before I knew it and I wished I could go once, maybe twice more.

But I decided to save that for another day.

The plan said 1:20 so I decided to run along the Yarra Trail, I figured 40 mins out and back would get me to Westerfolds, just.

I also experimented with nutrition on this run, opting a box of sultanas around the 35minute mark.

I have not had a lot of luck with taking on food during long runs in the past so I made sure I was not too far from a toilet when I decided to eat the sultanas and surprisingly they worked.

There was no intestinal discomfort, they were easy to eat and even easier to follow up with some water.

I also surprised myself and found I grossly misjudged my pace and the distances and found I was almost halfway around Westerfolds before I had to turn back, the pace still felt comfortable though, I guess this means I am becoming a stronger runner.

To mix things up a bit I decided to make this a multisport event and cycled to and from the run, meaning it was not just 80mins of running, but about 6Ks of cycling as well.

It was nice to — essentially — warm up and cool down with a cycle, I intend to employ this more regularly on my mid-week long runs.

On the Saturday, I opted to run a Mullum Mullum Creek, Reynolds Road, Tindals Road loop and covered just under 9Ks in the hour. I  managed to get most of the way up Reynolds Road before needing to take a small walking break.

On Sunday, I went north and found myself running up Kangaroo Ground-Warrandyte Road twice.

These climbs were long and tough, my legs were still a bit tired from the previous day and some spicy food had disagreed with me overnight.

But I persevered and soon I was 30mins in and staring the big hill down to the bottom of Pigeon Bank and soon after I was back on the trail and running along the river towards Osbourne Road — the Koornong Linear trail is a really nice piece of trail which I don’t get down to enough.

When I got home, I then discovered I was only a few seconds off of getting KOM for a segment along there so I will definitely be back in the very near future, plus the Netball Courts — Pigeon Bank — Osbourne Road is a really nice and challenging 10K which I think has made it to my list of favourite local runs.

Covering 17.5Ks in 2 hours, I managed to keep my average in the 6min/K window – 6:45 to be precise — which given the little bit of walking I did made me feel really happy with my efforts on trail and up those hills.

Between posting about wanting to run Princes Park and, well, Friday night  – I entered Princes Park — it is not often you can reflect on a conversation where the love of your life essentially tells you:

“Go for it. Go and run for 6 hours in the middle of the city on the weekend.”

In general, I am feeling pretty confident about this running thing right now.