TheFastOne who I will discover ran a 01:33 launches a verbal assault of encouragement at me. I am both surprised, relieved and a little peeved at the sudden attention all at the same time but his mad rantings give me the shock I need to push off and burn up the remaining meters with whatever is left in me.

2012 was my first ever half marathon, I went into it overconfident which resulted in a disappointing finish. A year later, I am a fitter, slimmer, more experienced and better prepared runner.

This time, I decided to run the route before the race, this became doubly important when the ‘new’ route was officially announced. So I ran the new part at the end of August which gave me an air of reassurance at the start line on race day.

Some friends of K-Theory were getting married in September, so I spent most of the month over-seas. I did manage a fantastic 6 mile run around the Imperial Palace complex in Tokyo (during a typhoon) which was mad as hell and as hot as it too, and a 40k hike over the 600meter+ mountains of the Komano Kodo trail in rural Japan. So although there was not a lot of running, there was defiantly a lot of exercise while I was away. The consequence of this was severe jet-lag three days before the race and meagre total UK acclimatisation mileage of 2 miles. So, going into the race on Sunday 29th I knew that my best chance of achieving a satisfying run was to simply run happy. Naturally, the golden finish time is as close to 2 hours as possible, sub would be awesome but jet-lagged and with no descent mileage for a good month if I could run the whole distance (without any hip strain issues (see 2012)) and come in under 2:15 I’d be happy.

The weather was good on race day, mid teens and a bit overcast in the morning, getting warmer from about 12pm. The race started at 09:15 and I crossed the start line about 10 minutes later. At this rate, I would be done before it got too hot. I had tried to get close to the 2hr pacer but sheer numbers of people (they had a turnout of 4000 this year) meant that I could only get as far as the 2:15 pacer. I know how these things work, it goes on chip time, anyway, and I know that for a 2hr I need to run 5:40K’s so starting with the slower runners shouldn’t be a problem.

For the first mile I made slow progress through the field. Naturally it takes me a mile or so to get up to speed, to find my race rythme and I remembered from last year that the first few miles included a number of narrow sections where the field bottlenecks. As this had become an exercise in consistent performance I decided to ease up and sit behind the wall of slower runners through these narrow sections. 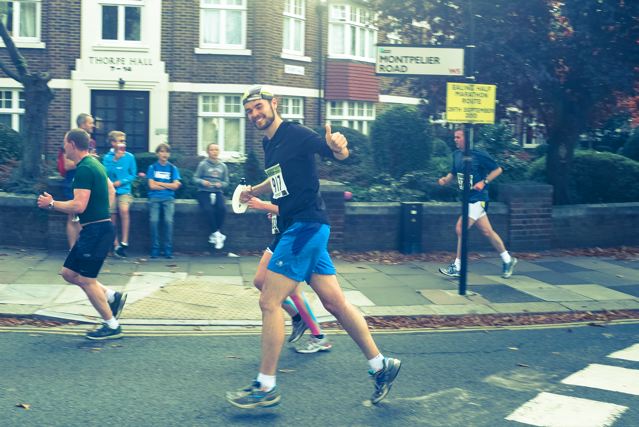 Miles 3 to 10 were the technical part of the course. By now I had run into some clean air and had lots of space around me to just get on with it. After running this section a month earlier I approached it with the confidence that going slow on the ups was ok. Now, these ups are noting compared to the hills I’ve been walking and training on. Still, proper hill etiquette is needed. Greenford Avenue was less of an issue this year – which was a relief, last year that little rise really destroyed my race, this year – not a problem. I encountered some slower runners on the way down which I couldn’t get past and lost some time behind them. To compound the frustration further, a short sprint to pass them before the Brent Valley Park section gave me a wicked stitch which took me a mile to run off.

Just before the final 5K my legs began to complain. However, I have acquired the mental discipline to keep my feet under me, my back straight and my running form in check, I had a couple of slow K’s but perseverance paid off. The final section through the park was easier this year than last, although I was in a lot of pain, I was able to keep running and even managed a bit of a speed up on the final 200 meters – I want to say sprint, but it wasn’t. I crossed the line at a time of 2:06 which is a couple of minutes slower than last year but after a month of hill trekking and jet lag I was extremely pleased with the time. Next year, my friends Frosty and Dell want to run it – looks like the EHM is becoming a regular race on my running calendar.